Busting the MythsOk, so I was in my third year and had (still do) a strong passion on the subject that is archaeology. I came to the conclusion that there were a few misconceptions that needed to be cleared up. First of all, the villains faced by most archaeologists these days are not the same as those portrayed on the screen. Instead they come in the form of conservation and consultation issues - not that they are all that bad - and the occasional grave robber. I have also come across people who think that it is the archaeologists who are the true grave robbers, and in no way thanks to Hollywood. Well, archaeologists do not go around breaking into ancient tombs and grabbing the most priceless artefacts before the entire structure comes crashing down.

Today, we have our own adventures that are totally different from what is shown on the big screen (how I wish this were not true), but this point does not make the job any less exciting. ## We are not dino-freaks. I really do not understand why people always seem to associate archaeology with dinosaurs. Archaeology is not about that at all; as a matter of fact palaeontology may lead you in a closer direction towards dinosaurs than archaeology possibly could. Archaeology takes a look at how humans (and in some cases pre-humans) lived and interacted with each other and their environment by looking at the remains that are left behind. These remains, which may seem like complete junk to the non-archaeologist, are what we would like to term as 'material culture'. The most awesome thing about archaeology is that it is not a clear-cut discipline. One can mix it up with almost anything depending on what it is that you want to find out. There are just so many branches within archaeology such as: prehistoric, historical, classical and my main focus and favourite, forensic archaeology. ## It is an adventure! Over the past few years, I have been on the most amazing archaeological adventures that I am going to remember for the rest of my life. In my first year of Varsity (2006), I headed off with my classmates to camp out in the middle of nowhere on a farm in the Limpopo, South Africa, teeming with game, giraffe and a lone leopard. We had just our tents to sleep in the open field. Once I actually climbed up a steep cliff, just to stay off the trail of the said feline. I swear I must have made it up there in less than two minutes. Flash forward to 2008, my adventures placed me in Johannesburg, in the middle of the notorious Hillbrow district on a site called Constitution Hill. It was a fort in which political activists such as Mahatma Gandhi and Nelson Mandela were held. The fort has a much longer history and has played many more roles other then being a political prison. After having heard 16 random gunshots, police and ambulance sirens the entire week, I was wondering what the hell I was doing there, but the objects that we found during our time there made it all worthwhile in the end.

Archaeological sites are not only confined to visitation by archaeologists, but the recent trend in South Africa is to open up these spaces to the general public for educational purposes. The most popular sites are the Cradle of Humankind, Sterkfontein and Mapungubwe. Mapungubwe in the northern region of South Africa spans an occupational period of over 1000 years. Its discovery was initially kept secret because the site's existence went against the belief that the Dutch, who landed in the Cape in 1652, were the first civilised people to inhibit South Africa. We have learned so much more about the archaeology and civilisations of southern Africa from sites such as Mapungubwe and Great Zimbabwe. All these archaeological adventures are on our collective doorsteps, if we take the initiative to take the first step outside. 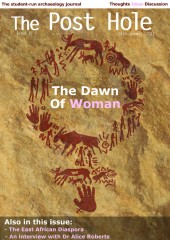 The Dawn of Woman
Jennifer Borrett

The East African Diaspora: The Problem with Slaves
Nik Petek