Relating To The Dead: Incorporating Archaeological Sites Into Our Personal Identity

I think it is fair to say that as archaeologists we tend to attach ourselves to certain archaeological sites, primarily those that we have excavated or worked on. By being involved in these sites we become inextricably linked with them. For some people this connection will be more emphatic than others. As such I would like to discuss a site that I have been involved in. In my first year as an undergraduate at the University Of Manchester, I was privileged to dig at Domuztepe with Dr Stuart Campbell. Domuztepe is a Halaf site in southern Turkey dating c. 5700-5400BC(Carter and Campbell 2003,118), covering an area of c.20Ha (Campbell and Carter 1999,395). Despite having excavated an estimated 1 percent of the site (Campbell and Carter 2006,269), the finds have been remarkable, ranging from ordinary domestic items to strange and fascinating mortuary practice.

Arguably the most discussed facet of Domuztepe is the site of the 'Death Pit', a 2m wide, 1.5m deep pit containing the remains of over 40 humans including numerous skulls and long bones, along with other faunal remains. The remains were deposited quickly and the pit was filled within a number of weeks, topped with ash concordant with a large fire(Campbell 2007-8,129) which would have been highly visible to the inhabitants of Domuztepe. The story of those interred in the Death Pit is a grisly one, and it is obvious that they have suffered a violent death. The cause of death of the individuals whose skulls are present is a blunt force trauma to the side of the skull (Carter and Campbell 2003,123-124) which appears to be deliberate and uniform. Where the skull has been struck there are missing pieces of bone. Although from this it is apparent that these persons suffered a violent end, their bodies were abused even after death. Sarah Whitcher Kansa has analysed the bones which show evidence of cutting and butchering (Carter and Campbell 2003,121), suggesting that these bodies were still fleshed at this point, which in turn leads us to believe that this cannot have happened long after death. Although not contemporary with Domuztepe, the site of Cayonu Tepesi also shows evidence of the cutting if not butchering of human remains on a large stone slab as well as other mammals (Loy and Wood 1989,452-453). Croucher (2010) has demonstrated that bone analysis shows teeth marks and evidence of bone splitting to obtain bone marrow (Croucher 2010,8), and that this may be suggesting a cannibalistic nature to the mortuary practice at Domuztepe.

So here we are faced with a scenario, and although perhaps quite a plausible one, but an interpretation only. However, it is how I relate with the archaeology at Domuztepe. Although the Death Pit was excavated many years before I worked there, I still feel a connection, an empathetic link with those persons who were killed and interred in the Death Pit. There is no doubt in my mind that my experiences at Domuztepe as a malleable undergraduate have shaped me as a person and formed part of my identity. Studying under the Archaeology Department at Manchester with so many experts on the subject, like Dr Stuart Campbell and Dr Karina Croucher has too influenced and added to my identity, individualism and sense of being.

Relating to the dead rarely means finding common ground between us and them, the differentia are simply too vast. Instead I feel that relating to the dead is more about finding the human part of them, going further than seeing them simply as human remains. I know that for me this is hard and it usually requires some kind of personal connection between myself and the dead. When I walk through Manchester Museum I feel nothing for the mummies in the Egyptology gallery, but yet digging at Domuztepe and living in that area for six weeks gave me something in common with those interred in the Death Pit, even if I had not discovered them myself. Relating to the dead is not easy and perhaps not even academically tangible, but perhaps not entirely impossible. 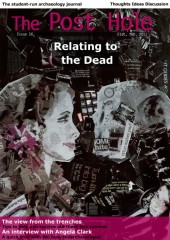 A View From the Trenches
Mark Simpson