Arguing For a More Integrated Approach to Interpreting Prehistoric Cultures

The study of prehistoric cultures is never going to be easy as they encompass so much variation in space, time, social and economic context. However, it is made all the more difficult by the fact that few archaeologists follow an interdisciplinary approach in their studies.

Prehistoric archaeology is endowed with a huge spectrum of sub-disciplines that contribute to research practice. Over the past six decades numerous innovations in theory, technology and procedure have greatly expanded the scope of research on prehistoric cultures. In 1953, American archaeologist Gordon Willey published his influential book "Prehistoric Settlement Patterns in the Viru Valley, Peru". Prior to this, the majority of archaeologists studied individual sites (Trigger 1989, 284). Willey was influenced by the holistic thinking of anthropologists Julian Steward and Franz Boas who applied their ideas of cultural ecology (the influence of the environment on culture change) to investigating the multiple prehistoric communities of the valley (Renfrew and Bahn 2008, 36).

Willey established the study of settlement patterns by using an unusually large array of survey methods to identify the context of multiple sites in relation to each other and the variable environment, plotting any changes through time and space. All resolutions of survey were employed from field walking and topography on a large scale to aerial photography on a smaller scale. Spatial data was correlated with relative time through seriation of pottery found from the field walking and subsequent excavation. This novel approach to interpreting prehistoric culture inspired the application of ecological frameworks to archaeological investigation, most notably by Lewis Binford and the New Archaeology paradigm in the 1960s.

In 1985, Niall Sharples excavated the well-known Iron Age hillfort Maiden Castle. However, Sharples didn't spend his entire time within the ramparts. Like Willey and Binford, he was aware that the site he was investigating had to be situated within a landscape, and that it was only by doing this that an appreciation of the site's chronology and economy could be made (Sharples 1991, 20). A number of environmental indicators were studied in order to achieve this, including: the local distributions of geology and soil type, suggesting the agricultural potential of the area; and microanalysis of pollen grains and mollusc shells, which helped identify the changing nature of the local environment and vegetation as each species of plant and snail is sensitive to these conditions. The relative frequencies of different types of snail shell and berry within the ditches of the fort were stratigraphically sequenced to illustrate the phases of deforestation and regeneration of woodland immediately surrounding these features (Sharples 1991, 26-27).

The use of radiocarbon dating allowed Sharples to make an equally comprehensive analysis of the site's chronology (Sharples 1991, 18 and 54). Technologies of absolute dating were not available to Mortimer Wheeler who excavated the fort ramparts in the mid-1930s. Because of this, Sharples was much better able to suggest the length and patterns of habitation at the site.

To a Culture-Historical archaeologist from the early twentieth century, the Mesolithic site of Star Carr may not seem particularly remarkable. But thanks to the work of Grahame Clark in 1949, it has received much deserved attention from archaeologists. Clark recognised the need to include organic remains in the interpretation of a site. Many of his contemporaries focused exclusively on non-organic artefacts like pottery and lithics for dating purposes due to the unavailability of modern techniques of absolute dating and because of the lower survival of decomposable artefacts like bone and plant remains (Trigger 1989, 265). Fortunately, the land around Star Carr is largely composed of peat allowing for excellent preservation of organic material.

Our current understanding of the site would not be possible without ecological methodology. Pollen environmental sampling identified the site as being on the edge of a lake and provided some insight into the diet of its inhabitants (Renfrew and Bahn 2008, 37). Clark's excavation at Star Carr was substantiation that detailed analysis of animal bones deciphered as much archaeological information as the analysis of human bones and other artefacts. As well as being a source of food, red deer were found to hold symbolic meaning to the local communities as a number of skulls made into head-dresses have been excavated. Recent interpretation is suggesting that these items may have had ritual significance due to their deposition on the lake-edge (Conneller 2004). Antler has been studied to suggest the season of their exploitation, which has later been questioned with the contrasting indication of season from the phase of eruption in deer teeth (Mellars and Dark 1988, 159-160). The dendrochronological analysis of wooden floor surfaces in later investigations have encouraged further discussion of the seasonality of the site's use and refined Clark's radiocarbon dating of it (Mellars and Dark 1988, 119).

Certain aspects of an individual's health and lifestyle can be derived from analysis of their organic chemistry. Stable isotope analysis of the bones of a canine excavated at Star Carr revealed it to have had marine fish as part of its diet. This has helped inform understanding of the domestication of animals in Mesolithic Britain and has suggested that the site was periodically occupied by a mobile hunter-fisher community (Clutton-Brock and Noe-Nygaard 1990, 651). The chemistry of artefacts provides a unique insight into the lifestyles within and between different communities. Manufacture, trade and subsistence can be investigated through the analysis of organic residues from pottery that can help determine what foods were contained within them (Grant, Gorin and Fleming 2008, 91-92).

Organic residue analysis has been used in recent academic research on patterns of dairying in southern Iron Age Britain, with a selected pottery assemblage from Maiden Castle used for part of the sampling. Lipids from pottery sherds were extracted and analysed to reveal the proportion of pottery used to contain dairy products, the correlation of pottery style with this function, and the predominant species source of the dairy (Copley et al. 2005, 493). The line of enquiry of this research is very different to the ecology-centred approach followed by Sharples, but the cultural and economic significance of the site at the contrasting scales of its past environment and its assemblage of pottery can be interpreted together to help build a more holistic view of the site.

Willey's investigation of the Viru Valley in Peru encouraged the integration of geographic contexts in the archaeological interpretation of sites. By taking into account the unique relationships between neighbouring communities and the environment, archaeologists could further their insight into prehistoric systems of subsistence, trade and relations beyond what they could only infer from the study of material culture. Using a similar approach, Sharples' study of Maiden Castle focused on its relationship with the geology and agricultural potential of the surrounding area to imagine the occupant's perspective of the world around them. This added to the earlier work by Wheeler who took an internal perspective of the physical structure of the site. The use of environmental sampling indicated aspects of the site's character no longer observable today and radiocarbon dating altered the evaluated age and chronology of habitation. The large extent of preservation of organic remains at Star Carr allowed Clark to use a variety of analytical techniques from the fields of ecology and organic chemistry in his study of the purpose, seasonality and length of the sites occupation. Osteological analysis of deer skulls suggested the species had symbolic meaning to the community, with signs of ritual use and deposition. Analysis of other faunal remains has hinted at the intensity of the site's use, and dendrochronology from more recent investigation has calibrated Clark's radiocarbon dating of the site. The stable isotope analysis of canine bones revealed the animal to be an early example of a domesticated dog in Mesolithic Britain and supported interpretation by Clark and others that the site was only used seasonally from the identification of partial marine diet. The employment of these many techniques allowed an extensively discussed comprehensive investigation of life at Star Carr.

The discipline of archaeology originated from multiple areas of academic enquiry. This encouraged the adoption of many styles and methods of investigation, meaning that from its earliest days archaeology was a subject only in its objective of studying past humanity. Theoretical debates such as in the Science Wars and between Processualism and Post-Processualism haven't been the cause of fragmentation; rather they have been symptoms of it, drawing much-needed attention to its permanent existence. Lack of cohesion in funding, education and dissemination all exist because of the very nature of archaeology's origins, and unless dealt with shall continue to limit its progress. By simplifying funding and removing ring-fencing, academics would be freer to collaborate with one another. This in turn would make easier the provision of a shared grounding in the principles of archaeology to students, enabling greater appreciation of the benefits different practices can give to archaeological research. To reach an integrated archaeology, dissemination of research would have to reach wider audiences with the use of an integrated media and a common vocabulary.

Reversing many of the things that made archaeology what it is today in order to create a more unified endeavour is filled with risk and is certainly a daunting prospect. But the prospect of an archaeology that asks more questions and gives fuller interpretations is perhaps a prospect worth aiming for. 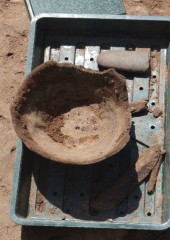