A few short introductions to the new team running The Post Hole over the coming three terms.

Jenny is a mature student and a lone parent, working on the Human Evolution module during autumn term. She is now in Year 3 of her BSc course.

Mark is also a mature student (there are only two on the team) studying Battlefield Archaeology this term. He is in Year 3 of a BA in Historical Archaeology and is the only non-prehistorian on the staff.

Jacqui, like Jenny and most of the other staff, is on the Human Evolution module this term. She is also on the BSc course and is the first 'port of call' for authors sending their work to The Post Hole.

Philip is also taking Human Evolution in the autumn term. He will be distributing the print copies of The Post Hole around the Manor and taking in competition entries.

Khadija is taking the BA in Archaeology and she is studying the Archaeology of Colonialism. She will keep the team on track with minutes from meetings and will answer general e-mail inquiries.

David is our sole non-Year 3 student, but also a pre-historian. He is currently in Year 2, studying Themes in Prehistory, Emergence of Mediterranean Civilisations and Research Skills. He will be deputising for each post on the team in the coming year. 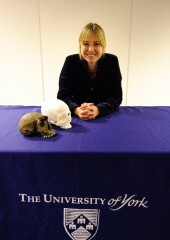