Life-wide learning is the way in which we learn and develop ourselves through different spaces and places that we inhabit every day of our lives (Jackson, 2011), and it is this life-wide journey that I have had the pleasure of experiencing over the last six months, that I hope to introduce you to, whilst outlining the main results of the research, and its wider implication for archaeology as a subject.

For the past six months a team unlike any that York has seen before has been working together to use archaeology in an entirely different way in order to shine a new light on both past and present society. The Arcifact team have worked together on a fantastic journey to bring together an exhibition that changes not just our understanding of modern day York, but also poses some poignant questions about the way in which different areas of society understood the landscape in years gone by. 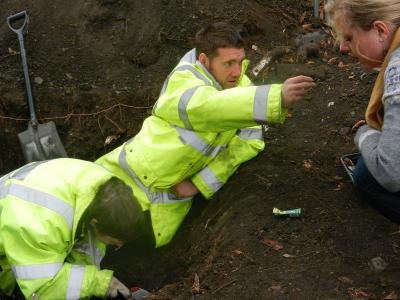 Our unusual team consisted of residents from the homeless shelter Arc Light, and students from York's archaeology department, working as equals in order to understand and interpret the site in a more accurate manner. My involvement in the project began with the excavation in October 2011 - a week-long dig based in the grounds of Bootham Park Hospital, an area that had been used by the homeless community over the last twenty years. The excavation was an amazing learning curve, with finds such as crisp packets, drug paraphernalia, CBM, sweet wrappers and other such seemingly mundane objects being given a story and life by our homeless colleagues. It is here that lies the genius of Rachael Kiddey's project. By working with people who do have or used to have regular contact with the kind of objects being excavated, their true meaning and use can be interpreted far more effectively than anything archaeologists could have achieved on our own.

The experience of finding clay pipe and considering it one of the best archaeological finds on the site was one that took time to get used to; however, soon enough the thrill of being able to date some finds immediately thanks to best before dates, rather than slaving through typology books, began to catch a hold as we developed an understanding of our site. While a full finds report has yet to be published, our initial observations gained through the extensive post-excavation analysis uncovered a number of interesting themes running through the site.

A large number of our finds related to smoking and food as would be expected. The food types were primarily focused around crisps and sweets. As one of our ex-homeless colleagues observed, when you are homeless you do not have access to places to cook or prepare food, and takeaways are often too expensive, so crisps and sweets make do. A large number of milk bottle tops were found on site; the reason suggested by another ex-homeless colleague is that milk is more "comforting and filling" than water, as well as making you feel better if on drugs or alcohol. The presence of drug paraphernalia but no spent needles is also an unusual occurrence. We know from certain finds and what we have been told that drugs were being taken at the site; however our excavation suggests that needles are being responsibly dispensed, most likely in the Sin Bins widely available for the homeless communities in York. 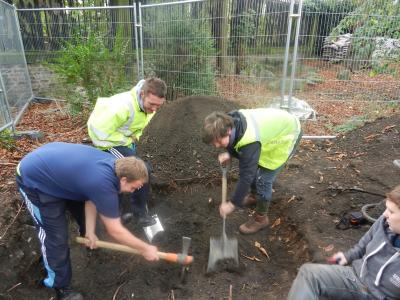 As well as our finds, one of the most important aspects of what we achieved in the excavation was engagement. Archaeology is fun. It is vital that as prospective archaeologists we introduce as many people from as wide a background as possible to the huge amounts you can get out of archaeology and ensure that it does not become a subject done only by a certain few. The more interest that people take in archaeology, the greater the opportunity for more excavations, and overall a better understanding of the past; as mused by Time Team's recently departed Mick Aston in an interview with British Archaeology, "Unless we get that public interested in the subject, we're never going to go anywhere...professional archaeologists will disappear if the public aren't interested" (Aston, 2012). In a period when archaeology budgets are being squeezed, it is vital that we demonstrate the relevance of our subject by the engagement of others. Projects such as this in which there is the breaking down of social boundaries through excavation is one of the best possible ways of doing that, something that is starting to be picked up around the country (Digability, 2012).

This movement towards wider participation in archaeology is also the key, I would suggest, to getting better interpretations of sites. In a site like Bootham Park hospital the advantage is clear: working with people who are familiar with the objects being found is only logical, however, does the same advantage of working in a diverse group apply to older artefacts and sites? My experiences at Bootham would suggest yes. Some of our more 'historical' finds such as clay pipe, green glaze ware and other older ceramics were given interpretations by our homeless colleagues different to anything I would have ever even thought of and yet these suggestions are equally (if not more) plausible then any of the interpretations given by 'proper' archaeologists. Why? Because different life experiences inevitably affect the way in which we understand and interpret sites, and if we accept this then we should do our utmost to find excavators with all backgrounds if possible. If we are inevitably biased in our interpretations, then we should try and mitigate it with as many different biased views as possible.

The work that we have done at Bootham and with Rachael Kiddey's use of 'Memory Maps' in which people map out 'their' version of York, opens up some fascinating questions about how landscape is viewed by different parts of society today. Many of our colleagues who slept rough in York in the past saw the city in a very different way to those of us who had not. This therefore raises the question of how the landscape was viewed by different aspects of society in the past. Questions we often hear in seminars, such as "how was this landscape viewed", seem redundant without first asking the questions "who was doing the viewing", while a landscape may be industrial to one strata of society it could be any number of things to another. 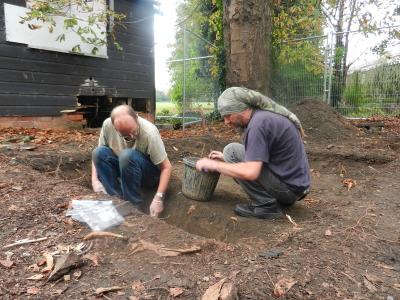 The excavation at Bootham and subsequent work has been a fantastic experience for which I am grateful for the opportunity to be a part of. Not only have we opened a new window into homelessness in York, and asked some fascinating questions about how, as archaeologists, we view the past, but I have also made some brilliant friends in the process. What I have been able to learn from the experience far outstrips what I can learn in a lecture theatre, both in regards to archaeology's practical applications, and in learning how to appreciate the value of a different kind of expert.

What I have outlined here are just a few of the conclusions and discoveries that we have made on our six month adventure. For the full results of our excavation and mapping work, we will be running a public exhibition between the 9th and 16th of March, where a video of the excavation and post-excavation analysis will be shown and the team will be available to answer any questions about the project, and illustrate and expand upon what has been mentioned here in regards to the impact we have made in understanding homelessness in York, as well as exploring the issues brought by the project in regards to how we interpret sites and finds.

For more details please visit our website at http://www.arcifact.webs.com or view our flyer at http://www.york.ac.uk/media/archaeology/documents/conferences/ARCIFACTS%20flyer.pdf 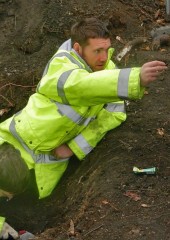 Gawthorpe Manor: A Modern Estate in the Making (Part 1 of 2)
David Altoft