Despite the well-known corpus of rock carvings and stelae from Chalcatzingo, where mythic narratives and political allegories illustrated elite worldviews and social concerns (e.g., Angulo 1987; Cook de Leonard 1967; Grove 2000), students of Mesoamerican archaeology are far less familiar with the cup-marked stones at the site. This is surprising, since cup-marked stones occur in sufficient numbers at Chalcatzingo to suggest that they were an appreciable feature of the community. Only a handful of publications have focused on these enigmatic features (Gay 1972; Grove 1987; Lambert 2010, 2011a, 2011b). The first comprehensive investigations of the boulders and rock outcrops with cup-marks speculated as to their possible ceremonial function (Gay 1972:84; Grove 1987:166). The most recent survey was conducted in 2005 by this author and its findings were later confirmed by subsequent visits to the site in 2006 and 2008. These investigations have yielded the most thorough account of cup-marked stones at Chalcatzingo to date. At present, 39 cup-marked stones have been identified at the site, although the 2005 survey failed to locate three of the stone “altars” identified by Carlo Gay in 1972 (Lambert 2011 c:141-142, Table 5.1).

One of the unanticipated results of the 2005, 2006, and 2008 surveys was the discovery of thirteen previously undocumented cup-marked stones at Chalcatzingo. The details of six of these features have since been published (Lambert 2011a, 2011b). The present paper is intended as a supplement to these other works, and will hopefully contribute to the ongoing documentation of the site by providing additional information regarding the seven remaining stones. 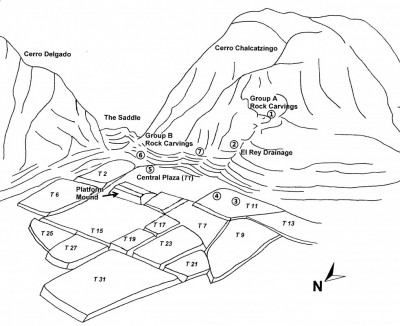 The Spatial and Chronological Setting of the New Cup-Marked Stones

Previous work at the site has demonstrated that the cup-marked stones of Chalcatzingo belonged to three separate cupulate complexes – cylindrical, pit & groove, and hemispheric – which could be identified by cup-marks with distinctive morphologies and dimensions (Lambert 2010:184-186). These complexes also demonstrated marked differences in their placement throughout the site and in the nature of their archaeological associations, suggesting that they had different chronological positions as well.

Except where noted, the majority of the cup-marked stones described in this report belong to the cylindrical cupulate complex, a tradition placed within the Middle Formative to Middle Classic period: c. 700 BC – AD 300 (Lambert 2010:190). A majority of the new cup-marked stones were found in areas which appear to correspond with the spatial distribution of previously documented examples of cylindrical cupules (Plate 1). These areas are namely the northwestern talus slopes of Cerro Chalcatzingo (near the Group A rock carvings), along the conjoining El Rey drainage which extends downhill from the Group A carvings towards the Central Plaza, and on the terraces on the western periphery of the Central Plaza (Lambert 2010:187). A few of the new stones appear to deviate from this pattern and are found on the eastern periphery of the Central Plaza, near the Group B carvings. While an explanation for the unusual placement of these cup-marked stones is currently a matter of conjecture, some of the information presented in this paper may help to elucidate their location within the site’s built landscape. 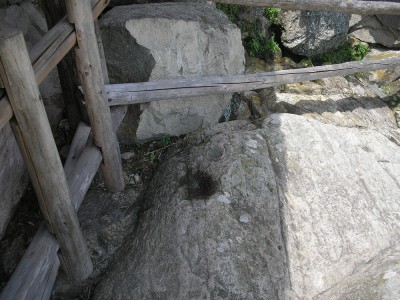 Description of the New Cup-Marked Stones

Rather than rely on the system of nomenclature established by either Gay (1972:73) or Grove (1987:159), this paper will consider each of the new stones using a system of designation that easily accommodates the inclusion of newly discovered cup-marked stones, and references their spatial contexts and archaeological associations (Grove and Angulo 1987:114-115). These designations are intended to identify the stones as cup-marked (i.e., CMS), to identify the area of the site in which they were found (e.g., Area I-A, II-B, etc.), and to provide them with an ordinal number based on their date of discovery (i.e., first stone or third stone discovered in that area). This system of nomenclature has been used in four other publications (Lambert 2010, 2011a, 2011b, 2011c).

The first two stones to be discussed are located on the northwestern talus slopes of Cerro Chalcatzingo (Area I-A) and will be considered together. CMS 1-A-2 was located on a rock outcrop northwest of Monument 7 and among the Group A rock carvings (Plate 2). This cup-marked stone has two faint, circular cupules. Both measure 2.5 cm in depth and 12.7 cm in diameter. CMS 1-A-9 is an upright boulder located along the trail paralleling the El Rey drainage and leading up to the Group A rock carvings (Plate 3). The boulder measures approximately 200 cm in height and contains a circular cupule on one of its vertically-oriented sides. This cupule measures 10 cm in depth and 11 cm in diameter. 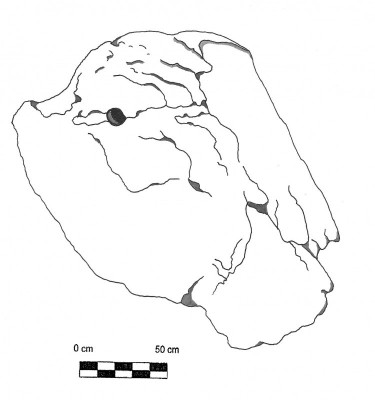 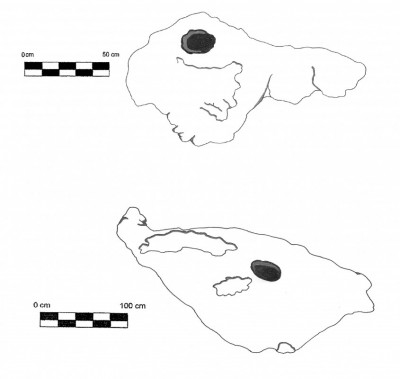 The next two cup-marked stones, CMS 2-A-5 and CMS 2-A-8, are situated in Terrace 11, to the west of the Central Plaza (Area II) (Plate 4). Although the drawings and descriptions of these features are accurate based on observations made in 2005, 2006 and 2008, the terrace was being used as pasture land during this time. As a result, there has been a great deal of soil erosion and the dimensions of the low-lying boulders may have changed. A certain amount of caution is therefore warranted when using the boulder measurements that are provided herein. 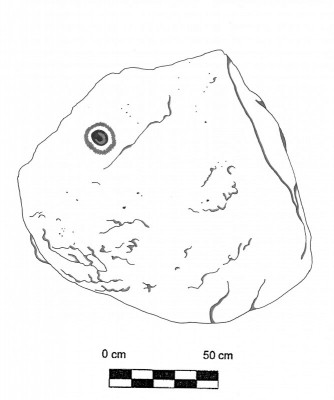 CMS 3-A-4 is a small triangular slab-like boulder situated to the east of the Central Plaza (Area III) (Plate 5). This boulder measures 90 cm x 92 cm x 107 cm and contains one small circular cupule with elevated sides like a crater. The cup-mark may be hemispheric or cylindrical in terms of its morphology. The ambiguity is due to its small size, which is just 2 cm in depth and 6 cm in diameter.

Finally, there are two cup-marked stones located near the northern talus slopes of Cerro Chalcatzingo (Area I-B). CMS 1-B-1 is a large flat-topped boulder overlooking the terraces below the Group B rock carvings. It is situated approximately 45 meters downhill from Monument 3 and overlooks MCR-18. The boulder is 423 cm in length and 250 cm in height (maximum) and exhibits three circular cup-marks on its upper surface (Plate 7). The first, southernmost cupule, measures 8.9 cm in depth and 15.9 cm in diameter. The second cupule has a depth of 13.5 cm and a diameter of 17.8 cm. The third and easternmost measures 14.4 cm in depth and 22.4 cm in diameter. 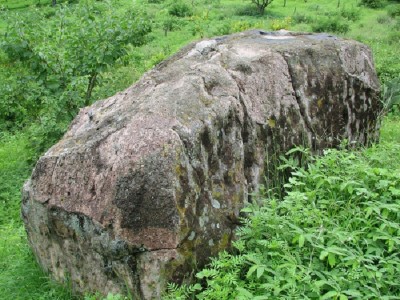 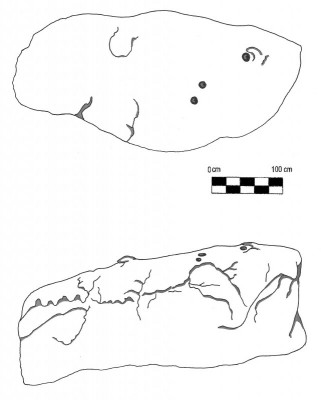 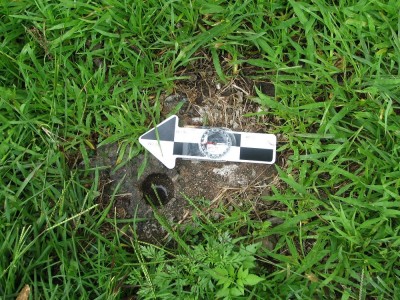 CMS 1-B-6 is located at the base of Cerro Chalcatzingo between the Group A and Group B rock carvings (Plate 8). The upper surface of this boulder was level with the surface of the ground when initially recorded in 2005 and it was therefore impossible to determine the size of the stone. There is one circular cup-mark on this boulder, measuring 3.8 cm in depth and 4.4 cm in diameter.

Previous analyses of the spatial positioning and archaeological associations of the cylindrical cupulate complex stones have indicated a strong symbolic and practical relationship between these features and the construction of a ritual water management system. This appears to involve the Group A rock carvings, the El Rey drainage along the northwestern side of Cerro Chalcatzingo (Area I-A), the Central Plaza (Area III), and Terraces 11 and 13 (Area II) on the western periphery of the site (Grove and Cyphers 1987:32-33, 37-41; Lambert 2011c:113, 167). What is known about the location of the new cup-marked stones from Chalcatzingo seems to corroborate this view with regards to Area I-A, Area II, and Area III. All of these new cup-marked stones seem to mirror the horizontal orientation of the previously recorded boulders in these areas, with the exception of CMS 1-A-9. This boulder is vertically-oriented and its cupule is therefore incapable of channeling or holding water. However, because of its uniqueness in the corpus of cup-marked stones at Chalcatzingo and its position on the sloping path paralleling the El Rey drainage, it is possible that this stone may have fallen from a more elevated point on the path where it was horizontal.

The appearance of cylindrical cupules in Area I-B seems more problematic. But it is possible to infer that these cup-marked stones had a similar role to those present in other areas of the site, due to the presence of a symbolic association between the nearby Group B rock carvings and water. This relationship is clearly expressed through the imagery of clouds, rainfall and agricultural fertility on Monuments 2, 31, 3 and 5 (Lambert 2011c:125). In addition to the Group B rock carvings, it is also interesting to note that there is a small artificial ditch, the El Paso drainage, located between the bottom of the northern talus slopes and the Central Plaza (Grove 1987:165). Taken together, this evidence points to the existence of a smaller-scale ritual water management system on the eastern periphery of Chalcatzingo that mirrored the one surrounding the El Rey drainage.

I wish to gratefully acknowledge the assistance of Mario Córdova Tello of the Instituto Nacional de Antropología e Historia center in Morelos. Arqlgo. Córdova Tello was instrumental in granting me permission to investigate Chalcatzingo’s cup-marked stones and rock carvings (INAH Permit No. P.A. 42/05). My research at the site was funded through a graduate student research grant from the Anthropology Department at Brandeis University. 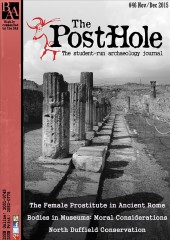 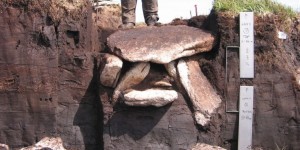 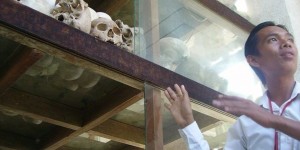 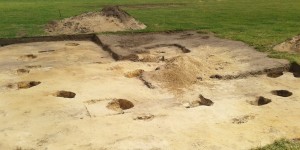 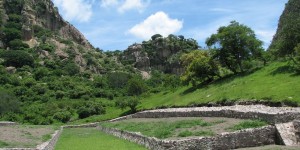 The remnant of a stone ballcourt ring from the Chalcatzingo archaeological zone
Arnaud F. Lambert