Children in Viking Studies: a case for material culture studies

Research agendas within Viking Studies traditionally focus on the men of early medieval Scandinavia (Jesch 1991, 1). In doing so, they inadequately address women and children. This paper addresses archaeological approaches to children in Viking Studies. Specifically, the types of evidence available to the study of early medieval children and childhood are considered, alongside the ways scholars have analysed and interpreted these sources. In addressing varying approaches to the archaeology of early medieval children, I will highlight the analytical styles used to examine the osteological and material remains. This will facilitate a consideration of the value of scientific methodologies and theoretical frameworks in understanding the role of artefacts within broader socio-cultural contexts. In this way, I will argue that the study of Viking-Age children, though historically stagnant, could be expanded through implementation of theoretical frameworks focused on the influence of both actors and their material culture.

Children in the Viking-Age

Traditional conceptions of children of early medieval Scandinavia are vague and minimal. To an extent this may be attributed to the quantity and quality of the sources relevant to the study of Viking-Age youth. In the Norse written record, males dominate and children receive scant attention from authors (Gardela 2012, 236). In Icelandic sagas when children are mentioned, it is usually the quantity of sons which is deemed of significance (Magnusson and Pálsson 1969, 86), though there are some references to children playing games in these later sources (Hansen 2002, 6). However, these accounts are limited and both temporally and spatially detached from early-medieval Scandinavia; therefore, archaeologists look to other types of evidence for additional insight into these aspects of the Viking world.

As a discipline, archaeology has presented limited and homogenously stark conceptions of childhood (Boswell 1984, 10; Kamp 2001, 24; Baxter 2005, 9). For their part, medieval archaeologists traditionally accepted the trope of the “invisible” child as well; however, artefacts related to medieval childhood have begun to garner more attention (Gerrard 2003, 223). Within the archaeological record of early medieval Scandinavia, children can be seen in some artefact assemblages and burials (Hadley and Hemer 2014, 1). To understand the degree to which research of archaeological materials from these contexts has impacted studies of Viking-Age children, the methods of assessment must be considered.

One key source of information on early medieval Scandinavian children comes from burials. In keeping with other sources, child burials are not abundant in the archaeological record. Despite the high child mortality rate of Viking-Age Scandinavia (Hedenstierna-Jonson 2015, 97), they represent only a small proportion of excavated burials (Price 2012, 259). Scholars point to alternative burial practices and infanticide as possible explanations for the underrepresentation of children in the archaeological record (Gardela 2012, 236), but nonetheless, those child burials that have been found from early medieval Scandinavian contexts have proved informative.

The value of these burials resides in the ways archaeologists analyse and interpret them. Osteological and biochemical analyses offer considerable insight into the activities of individuals. Analyses of skeletal and dental remains for ‘Harris lines, dental hypoplasias, porotic hyperostosis, reduced cortical bone thickness and retarded size’ all provide information about the conditions faced by children during their lives (Kamp 2001, 9). Moreover, in optimum conditions, stable isotope analyses of sulphur, nitrogen and carbon can reveal both dietary and geographical habits of individuals (Hedenstierna-Jonson 2015, 96). To assess the significance of these types of analysis, it is useful to look at an example.

The early medieval emporium at Birka, on the Swedish island of Björkö, was established in the mid eighth-century (Richards 2005, 41). The area contains approximately two thousand burial mounds in addition to an assortment of chamber and cremation burials (Ambrosiani 2012, 97). Of the analyses of Birka’s burial remains conducted throughout the years (see Gräslund 1981; Linderholm et al. 2008), the analyses of Bj 463 (Figure 1) offers the most relevant evidence of the importance of osteological and biochemical analyses of children. Bj 463 consists of a rectangular coffin containing the body of a young girl, a small knife, needle case of bone, Borre-style brooch and forty-seven glass beads (Hedenstierna-Jonson 2015, 93-5). Through stable isotope analysis, archaeologists established that her diet was primarily meat-based (despite the island environment of her burial) and that she was most likely not originally from Birka (ibid 96). As her diet likely represents that of her community, investigation of Birka’s migrant girl offers a new understanding of larger trends within the environment and society (Hedenstierna-Jonson 2015, 99). In turn, this information allows archaeologists to adapt models of Viking-Age life courses and consider the catalysts of larger events such as migration. The contradictory insights gleaned from this study highlight the utility of diversifying archaeological investigations. 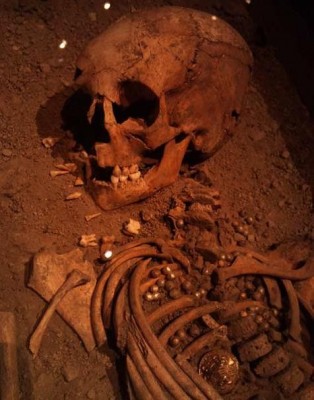 Figure 1: Osteological analysis of Bj 463 has provided insight into the role of children in Scandinavian migration (Wåhlander, et al. 2012, 174).

Material culture is another resource for archaeologists studying Viking-Age children. As with every other demographic, younger generations have left tangible remnants of their existence throughout time (Baxter 2005, 10). In both osteologically male and female child burials in Scandinavia, archaeologists have found dress ornaments and beads, but only young male graves contained weights and only female’s included sickles, keys, sewing kits and mirrors (Svanberg 2003, 21). Though these artefacts offer some insight into society’s regard for children, reliance on this evidence is complicated by the ambiguity of their deposition and ownership (Pearson 2001, 7) in addition to mortuary traditions which idealised the dead (Artelius and Svanberg 2005, 11).

Other material culture has been recovered from excavations of settlements. In fact, children appeared in the archaeological consciousness to account for unexplainable miniature objects discovered in these settings (Baxter 2005, 8). However, often the study of objects ascribed to children has been limited to establishing ownership (Wilkie 2000, 100). Consequently analysis has been narrowly focused, as this approach emphasizes the manners in which small objects conflict with the adult world, rather than the information they contain regarding children and childhood (Crawford 2009, 59). Despite this general trend, some archaeologists have begun to consider the material culture of youth in broader contexts. 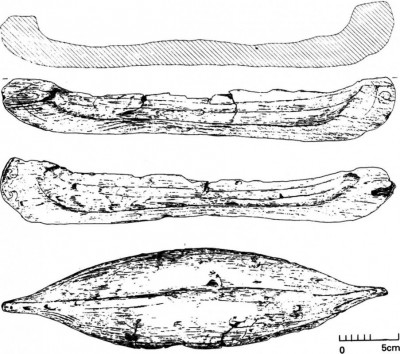 Figure 2: This sketch of a miniature ship from Viking-Age Dublin is typical of the types of artefacts associated with children (Gardela 2012, 238).

Within medieval archaeology, artefacts interpreted as toys have started to attract more attention (Gerrard 2003, 223). In many instances, archaeological analysis and interpretation of medieval toys is an arduous task. As Crawford (2009, 57) points out, many excavation reports lack any mention of toy finds. Nonetheless, within Viking Studies some objects have been interpreted as toys. For example, Gardela (2012, 239) analyses miniature wooden horses and boats (Figure 2) from Dublin and Trondheim in her more general assessment of early-medieval Scandinavians. Analysis of toys, such as this, is unique to Viking Studies; thus, it is significant in demonstrating the relevance of children’s material culture in discussions of socio-cultural phenomena. However, this analysis follows more general trends which restrictively categorise small objects as children’s artefacts, without exploring other explanations. It also focuses singularly on what children played with rather than why they played with these objects. And in doing so, this analysis fails to go beyond and consider broader implications of the objects associated with this demographic. For instance, Wilkie (2000, 101) argues that objects are given to children purposefully to ‘suggest and enforce certain norms of behavior for children based upon their gender, age, socio-economic class and even socio-cultural ideals of beauty’. Accordingly, McAlister (2013, np) argues that Viking-Age miniature horses, boats and swords can be interpreted as evidence of male enculturation based upon accounts in Icelandic sagas. Further analysis of these artefacts holds great potential for improving the understanding of topics concerning the social and domestic activities of the Viking world.

As the toys from Dublin and Trondheim and the osteological remains of the Birka girl demonstrate, renewed interests in these traditionally marginalised groups afford an interesting insight into the Viking world. The recognition of the archaeology of Viking-Age children in these studies is a significant step in our understanding of their culture and place in society during this period. Still, it is clear that the inclusion of children in medieval archaeological discourses is sporadic and that the subject is still in its infancy. Like much of archaeology, this initial phase has not been quick to implement post-processual theory in its research.

This lies in direct contrast with current developments within early medieval archaeology. Although as a whole, medieval archaeology has been criticized for its limited theoretical engagement (Hodges 1982, 8; Austin 1990, 11; Gerrard 2003, 218), it has been noted that scholars of the early medieval period increasingly employ frameworks which seek to understand the agency of both humans and material culture (Gilchrist 2012, 216). Within Viking Studies, more specifically, there has been an increase in research which analyses artefacts with a view to their potential meaningfulness as well as their place within broader socio-political contexts.

In recent research, combs (Ashby 2009), silver (Sindbæk 2011) and silk (Vedeler 2014) have been analysed in order to discern their chronologies and roles in the broader setting of the Viking diaspora. These studies convincingly present the ability of material culture to contribute to discussions of broader socio-cultural phenomena. In these studies, scholars approached material culture through revisions of long-accepted typologies (Ashby 2009), considerations of interdisciplinary evidence (Sindbæk 2011) and adoption of theoretical frameworks from social anthropology (Vedeler 2014, 1-2). In doing so, they contributed to on-going discussions regarding early North Sea contact (Ashby 2009), motivations for Scandinavian expansion in the early ninth-century (Sindbæk 2011, 52) and the nature and extent of craft production and trade routes (Vedeler 2014, 1-2). Thus, these studies convincingly present the significance of material culture in the social and political machinations of Viking-Age Scandinavia and the importance of interdisciplinary approaches and materiality in teasing out glimpses of the role of these objects in the past.

Accordingly, it seems that use of these theories could add much to the study of children as actors, and to childhood as a socially constructed phase of life. They offer an intellectual context through which it is possible to trace the diverse environments and actors encountered by the archaeology of children, as well as their wider cultural significance. By analysing and interpreting the material culture of children in a manner which considers the way the variable meaningfulness of the production, consumption and deposition of these items evolved, it may be possible to arrive at new understandings of the roles of this demographic within early medieval Scandinavian society. The studies alluded to above demonstrate the ways more comprehensive understandings of artefacts and their likely owners aid in understanding macro-level phenomena. Consequently, the archaeology of Viking-Age children seems likely to benefit Viking Studies more generally through an implicitly theoretical assessment based in material culture studies.

This brief consideration of the archaeology of Viking-Age children has attempted to highlight the current state of this area of study. The infamous raiders and traders of early medieval Scandinavia once were children too. As with most humans, this phase likely impacted their development and world view. As scholars continue to grapple with the catalysts of the Viking diaspora, they should not neglect the archaeology of childhood. The contributions made by recent research to the understanding of the social significance of material culture in Viking Studies suggests that post-processual theoretical frameworks from material culture studies offer a viable means of integrating children into discussions of broader phenomena within the period. The precise impact of Viking-Age children and childhood on the macro-scale is as yet unclear, but until they are included in these areas of research, understandings of this period will remain partial at best. 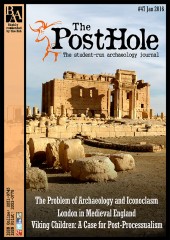 Editorial: Up the creek without a paddle
Freya Lawson-Jones 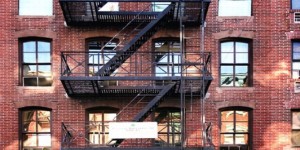 Missed Opportunities and Unfulfilled Obligations: The case for using historic house museums as a vehicle for engaging with controversial and dissonant contemporary issues.
Izzy Bartley 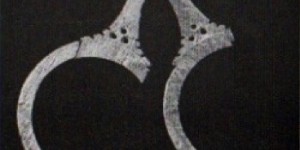