Archaeology in the Media

As archaeology students, we are perhaps more in-tune with archaeology in the media, with frequent access to archaeological journals, our own reading for coursework (for the model student at least), and our personal interest in the subject sparking us to turn up the television when archaeology is mentioned or zeroing-in on archaeological headlines when flicking through a newspaper. This is likely not to be the case with the general public. The media has a role in informing the wolrd about archaeology but how big is this role? When is archaeology expressed in the media, for what reasons, and how frequently does it appear? Does this reflect the financial aspirations of the media as an industry? Does archaeology even need the media for it to contine to attract attention and interest as a whole? These are the questions which this article will adress.

The media portrays archaeology infrequently in the UK, the most recent high profile find being the Staffordshire Hoard, found in July 2009. The hoard consists of over 1, 500 beautifully crafted pieces of gold and silver, dated to the 7th century AD (Anon, n.d.). Worth around ?3.3 million, it has obviously gained much media interest. Finds such as this are fundamentally why the coverage of archaeological excavations is not particularly high profile, because such a large percentage are not associated with great hoards of gold, but pottery, postholes, ceramic building material (CBM) and the odd coin.

Most digs do produce an amount of 'small finds', whether it is coins, glass, jewelry, or rare or interesting items for the site in question. However, on the whole, these are usually uninteresting to people outside of the archaeological community, and of little value to the media, especially where the majority of the archaeology recovered is gravel with a small scatter of flint tools. This is not going to make them money and perhaps explains why Joe Public's historical knowledge is of later periods such as the Romans and the Tudors, where finds tend to be more numerous, with Rome itself and all its associated monuments, and finds such as the Mary Rose being relatively high profile visitor attractions.

Therefore the media tends to focus on extraordinary or rare finds such as the Staffordshire Hoard, which is not only worth a lot of money itself, but will generate a large amount of interest in the public with paper sales and television ratings.

Archaeology as a resource and as an aspect of national heritage is, in some respects, accessible to the public without the media's input. We have various museums, existing archaeological sites and buildings (such as the Tower of London), along with a myriad of information available both on the internet and in libraries. I would, however, argue that these resources are poorly advertised and of limmitted apeal to the public.

Museums, on the whole, exist in many towns and cities. However, unless you are a parent intent on expanding your children's cultural and historical knowledge, or have a genuine interest in the displays, then you are unlikely to spend money and time dawdling round an exhibit, visiting a monument or taking out reports on archaeological excavations. An exception to this would be something akin to the National History Museum in London which is both free and incredible in its coverage, making it interesting, at least in part, to even the most pessimistic of museum visitors.

Nevertheless, I do think that there are a large number of people who do have a genuine interest in heritage and archaeology, especially in England due to our national character and the diversity of our past. I would therefore argue that people visiting archaeological resources do so despite the little media coverage given to them and their small appeal to the general public.

Archaeology is therefore fundamentally available to those who wish to access it. Museums, heritage sites and libraries are all existent but they are not forced down our throats via advertisements or newspaper headlines. The media has little part to play in advertising these kinds of archaeological outlets simply because the heritage services and local libraries do not have the funds to pay for such things as television advertisements, billboards and the like. How often do you see an advert for a museum, national heritage site or a library's new collection of historical journals? Consider how popular sites would be if archaeology was given the kind of press coverage that the FIFA world cup is currently allowed: Staffordshire Hoard posters throughout Tesco, Jorvik being advertised on Mars bars, or the National Museum being the official sponsor of Britain's Got Talent?

Despite this lack of funding, archaeology still manages to seep into the mainstream media in some respects. Time Team is probably the most well-known 'archaeological resource' available to the public. As an archaeologist, I dread the continual 'So, you're an archaeologist - like Time Team, yeah?' that is issued from most people who do not understand what real archaeology involves. Time Team is what people imagine to be 'real' archaeology, because that is what they are shown on television. In this way the media has given an inaccurate interpretation of what archaeology is, which at times can be either beneficial or very detrimental.

In my opinion, Time Team is, for the most part, a positive thing. The show gives viewers, especially young children, inspiration and insight into a career in archaeology, and generally promotes the profession. On the other hand, it could be said that it is 'dumbing-down' the profession and making a big deal about unimportant, but flashy finds, therefore giving people a less serious view of archaeology as a whole. Overall, television shows such as Time Team provide a valuable gateway to archaeology in the UK and, whether or not it is successful in accurately presenting the subject, it nevertheless promotes it. After all, 'there is no such thing as bad publicity'.

Archaeology does appear in media all over the world. In general, the subject appears only in the news as high profile coverage when something influential, extravagant or expensive is found, due to the financial nature of the media as an industry and the capitalistic trend of our global society. On a more practical level, perhaps newly discovered archaeology does not show in the media simply because there is too much of it, with most having little significance for the general public.

Museums and excavations are not frequently advertised in the media, but continue to gain interest and visitors because of a seemingly national interest in the past, along with football and rugby.

In the end, archaeology will always have a place in the hearts of all human beings because of a want for knowledge and understanding of the past, to know what happened to our ancestors and where we came from. For this deeply internal reason alone, despite little media coverage, people will continue to be interested in archaeology, visit museums and sites, and sustain the profession in the years to come. 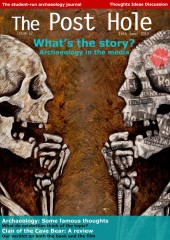