Perhaps one of the most influential prehistorians of the 20th century, Grahame Clark was a renaissance archaeologist and brought around a much needed change in archaeology. This paper briefly outlines a biography of the great man that is Grahame Clark.

Born July 28th 1907, John Grahame Douglas Clark was born into a prosperous upper middle class family in Kent. Grahame Clark was brought up by his mother and uncle, as his father passed away from an influenza outbreak while returning from military service in 1919 (Fagan 2001). After the death of his father the family moved to Sussex where Clark spent the rest of his childhood collecting flints from sites all over the Sussex Downs on his pony (Fagan 2001). From an early age he became a 'passionate connoisseur' of flints so much so that at his school of Marlborough College he acquired the nickname "Stones and Bones" (Clark 1993). As a schoolboy, Clark published his first set of papers based on his assessment of the artefacts which he had collected from the Sussex Downs. In his paper Clark stated that only three percent of his collections were weapons and the remainder was domestic instruments; this was his first break away from the view at the time of prehistoric savages (Fagan 2001; Tylor 1871).

Few universities studied prehistoric archaeology in the 1920's, let alone viewed it as a serious independent discipline. Clark joined the University of Cambridge's Anthropology department in 1927 as it was one of the few to study elements of the subject he was so passionate about. However he spent two years studying history instead after been unable to achieve a scholarship (Fagan 2001). By this point, Clark was an expert in stone tools with almost a decade of experience in the subject and had written several papers while studying history at Cambridge. Clark then took an honours degree in Archaeology and Anthropology, studying ethnography and attempting to form links between it and archaeology (Fagan 2001). Clark was the first student to be registered for a doctorate in Archaeology in Britain and undertook a broad study into Mesolithic Britain (Fagan 2001). Before Clark, the Mesolithic was almost ignored in Britain, a vast enigma waiting to be solved. With his passion for flints Clark was the ideal person to begin to define the Mesolithic in Britain. In 1934, Clark published his first book The Mesolithic Age in Britain based upon his doctoral dissertation, and although not widely read, it was regarded as remarkable by those in the field (Fagan 2001).

In 1939 World War II broke out, and by this point he had become a respected academic with three books under his belt and a variety of archaeological excavations undertaken. In 1940, the academic was drafted into the RAF reserves as a pilot, serving as an aerial photograph interpreter like many archaeologists did (Fagan 2001). He was able to remain in Britain due to a 'low health status', most likely due to dysentery as a child (Fagan 2001). During this time, Clark helped to maintain the publications of the Prehistoric Society, publishing a very thin issue throughout the war years. One of his greatest achievements was keeping the Prehistoric Society going strong throughout the war with over six hundred members at the end of the war (Fagan 2001).

Perhaps Clark's most famous endeavor is his excavation of the Mesolithic site Star Carr. Star Carr was discovered by John Moore in a rather plain looking field in Flixton, North Yorkshire in 1948, when Moore saw flint blades sticking out of a ditch by the Hartford cut (Clark 1954). Upon being called to visit the site Clark immediately knew that it was going to be important for the British Mesolithic (Fagan 2001). The peat ensured that a pollen record would be likely to reveal as much as similar sites in Scandinavia (Clark 1954). Three seasons of excavation followed, and little did Clark know how many excavations he was sparking in the Flixton area. The excavations were muddy and conditions were likely to have been difficult, but for its day, it was one of the most multi-disciplinary excavations, enlisting botanists and pollen experts from all over the world (Clark 1954). Though the excavations were made very difficult by the waterlogged conditions, Clark was nonetheless persistent and exposed a brushwood platform, a recumbent birch tree (likely felled by beavers) as well as thousands of pieces of flint, bone and antler (Clark 1954). The most famous artefacts recovered from Star Carr are the antler frontlets for which the site became known.

Even before Clark published his findings in his final report, he was elected to the position of Disney Professor in 1952 at the University of Cambridge. The Disney Professorship is one of the most respected academic archaeology positions in the world. In 1959, Clark was elected as president of the Prehistoric Society, another well deserved position which he dedicated a great deal of time to and propelled forward (Fagan 2001). Clark spent most of his years at Cambridge publishing books and papers on a number of topics, helping to push forward our perspectives of prehistory, especially the British Mesolithic. In 1973, he retired from the Disney Chair. He immediately began a new academic career as the master of Peterhouse College, where he was very happy for many years and continued to write several books and papers (Fagan 2001). In 1990, Clark received the Erasmus Prize for his contributions to prehistory.

On September 12th 1995 Clark suffered from a stroke off the coast of Cyprus and died in his home with his wife Mollie holding his hand (Fagan 2001).

Grahame "Stones and Bones" Clark was one of the greatest prehistorians of all time. He was a true prehistoric pioneer. 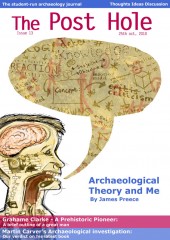