Preece's (2010) broadside against the worryingly common indifference to theory in archaeology should be welcomed, and hopefully will provide an impetus to debate amongst us all. His argument, however, that post-processualism does not exist and has warped research agendas, should be held up to further criticism. In this brief article I shall attempt to draw out the strengths in Preece's discussion and perhaps achieve a more balanced view of the way forward, which is not, as Preece suggests, to go backwards. It is ironic that Preece's argument revolves around the deconstruction of the term post-processualism, a very post-modern concept. That, however, is not our main point of discussion.

Preece (2010) makes an admirable case for the non-existence of post-processualism as a coherent body of theory. In this he is probably quite correct. There are a wide range of theoretical standpoints in 'post-processual' archaeology, few of which are compatible with each other (e.g. Ray 1987, Tilley 1994, Edmonds 2004, Sanz et al 2008), and some of which actively deconstruct each others' work (e.g. Barrett and Ko 2009 on Tilley 1994). This gives a sense of the fundamentally disparate group of archaeologists which we are considering, whilst there is yet further debate between more traditional archaeologists and those they label 'post-processualists' (e.g. Fleming 2006, 2007 against Johnson 2006, 2007). This maelstrom of theory has lead to some processual archaeologists bemoaning post-processualism's 'chameleon-like' nature, which change their form under criticism but maintain their essential characteristics (pers. comm. H Mytum January 2007). This is not, however, a function of 'post-processual' scholars' inherently slippery and sly nature, as the quote might suggest, but rather a natural outcome of the attempts by processualist scholars to squeeze the multiple and often contradictory theories of those disagreeing with them into the neat boxes and categories of which their 'systems thinking' (Renfrew 1994) is so fond.

I feel, however, that post-processualism as a term, if it means anything, is just as Preece suggests, an attempt to differentiate this very broad spectrum of work from processualist scholarship. Processualism has a very well-documented set of strengths and weaknesses, and this debate formed a major theoretical battleground in the 1980s (see Trigger 2006 for a gentle summary). The failure of processualism to account satisfactorily for socialised agency, actioned identity and regional complexity, amongst other issues, necessitated a push forward. This emphasises social and cultural variability, and analysis of the factors behind the processes active in such dynamics. As with many academic zeitgeists, in the heady early years of 'post-processualism' certain scholars threw the baby out with the bath water, and produced views just as unbalanced as those they criticised; indeed, some scholars still hold these extreme positions (Shanks and Tilley 1987, Tilley 1994, 2008, Bender et al 2007). The controversy created by such scholars has sadly over-shadowed the more balanced and subtle interpretative models used by other scholars, such as Gillings and Goodrick (1996), Edmonds and Seaborne (2001), Bradley (2005), Gillings et al (2008) and Goodchild and Witcher (2010). The theoretical hallmarks of this field include attention to landscape context, holistic methods of study, multiple and dynamic identities, materiality, sensualism, reflexivity, and the use of GIS models as heuristic devices (Goodchild and Witcher 2010). Rather than making the vague spatial analyses rightly criticised by Preece (2010), these works employ multiple techniques of data-gathering and analysis in order to make detailed, reflexive and holistic interpretations of the past that are emphatically not processualist. Perhaps the closest term to describe the works of such scholars would be 'holistic contextualism', although I doubt many would agree, and this is the subject for another article.

Preece (2010) focuses particularly upon the impact of 'post-processualist' theories in Roman archaeology, and given his emphasis on the paradigm, and my own research interests in the field, I feel that his work needs grounding in a wider context. Roman archaeology is peculiar in British archaeology because it suffers particularly from the post-imperial biases, nostalgias, and guilt-complexes that form a major part of legacy of the British Empire to academia (Hingley 2000). This has ensured a far more laboured deconstruction of prior scholarship in the past twenty years than has occurred in other periods of British archaeology (e.g. Mattingly 1997, 2006, Webster 2001). This has of course meant a rather excessive focus on the concept of identity in certain quarters, at the expense of research into the economy and agricultural practice. The debate on urbanism remains very active, albeit couched in rather different terms to the ancient 'consumer/producer city' debate (e.g. Laurence 1994, Esmonde Cleary 2005, Willis 2007, Rogers 2008). These studies have in common a concern with rigorous data gathering, particularly excavation and geoarchaeological survey, and attempts to integrate the social with the functional, and question the culture/nature dichotomy. Although space runs short here, I believe that these will be some of the most fundamental concerns of Roman archaeology over the coming years as it moves forward, rather than a move backwards to the rigid and desolate systems of processualism. 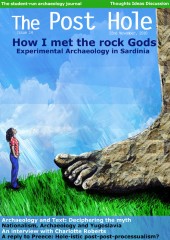